This is Halloween, Everybody Make a Scene

(title stolen from "This is Halloween" from A Nightmare Before Christmas.)

I've always been a big fan of Halloween. As a kid, it definitely was more for the candy, but it was also dressing up as something completely different for a night.  My dad would always take me out, until I got old enough to go with just my friends. When I was little I had the little trick-or-treat pumpkin basket, when I was older, it was a pillowcase, and we'd hit houses until the bags were too heavy to carry.

While all my childhood Halloween photos are at my parents, I found this photo floating around. I think I was 21, and decided to dress up as Obi-Wan Kenobi. This was also before I started wearing contacts occasionally, as you can tell. 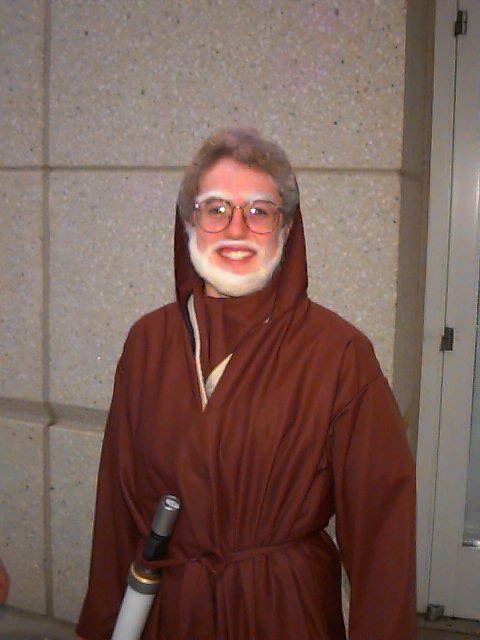 With Peter, I'm happy to share my love of Halloween with him.  This year, since he's almost 2, we figured we could actually do stuff with him. Oh sure, we took him trick or treating last year, but only to a few houses, and we had to carry him: With all the Halloween goings-on this year, it was hard to narrow down exactly what to do, but we settled on the Colorado Railroad Museum: Boo at the Zoo: and capped off the weekend with Trick or Treating: He definitely seemed to have fun at all the events.  The weather at the railroad museum was a little bit warm, so we put him back in his Yoda costume, which fit ok (it was a toddler size when we bought it last year).  However I believe I've created a monster in terms of candy.  Everytime somebody put something in his bucket, he'd immediately want to eat it, so I took to having a little bag of M&Ms in my pocket, and I'd give him one after each house.  Monday morning he saw the candy on the counter, and said "candy, candy" until we took it away.

Next year he'll probably be at the point where he can pick out his own costume, and won't have to be prompted to say "trick or treat" (he said it as "dee-dee-deet" this year :).

Peter and the Pumpkins

Today we went to Cottonwood Farms to get some pumpkins, check out the farm animals, go through the hay maze, and take a hay ride. While the weather was drizzly and chilly, it still was fun. We got plenty of photos, which led me to this comparison.

The first photo was taken October 18, 2009. The second one was taken today, October 10, 2010. It's amazing how much different he looks in a year. He went from being a baby, to being a toddler in one fell swoop. Trains and Fall and Pumpkins (oh my!)

Lots of photos this weekend! While I've learned in the past that it's really hard to set up for photos when I've got Peter with me, I've also learned to just suck it up and bring my camera with me when I take him somewhere, just in case I get a chance to take some shots.

First up, Pumpkin Fest! We got there right when it started, and skipped getting pumpkins. The line for the pumpkins was HUGE, and I figured that a) It was only October 2nd, so plenty of time, and plenty of places to get pumpkins, and b) there were virtually no lines for anything else, so why not do all that stuff? We were the first on the hay ride, and ended up being able to go twice because people were in the long pumpkin line, did the bouncy slide, petting zoo, saw the firetruck (Peter got his fireman's hat), and wandered around checking everything out. They did have a little "family photo area" where you could pose your child, so somehow managed to do that. I really didn't like the lighting, but didn't have much choice. :) Sunday we went to the Colorado Railroad Museum. WOW!! This place is so freakin' sweet, and much bigger than I thought. So many trains to wander around and see, and some of them you can go inside. I really want to go back when I don't have Peter with me to take some photos, but I did end up getting my favorite weekend photo while he was playing around in the gravel. I used one of Matt Kloskowski's Lightroom presets (the Vintage one) for this shot, and love how it turned out.

However, I do need to share another photo I got that I love - Peter walking down the railroad tracks. And finally, I'm taking a class over at Big Picture Classes called Picture Fall, where you get an email prompt everyday, and you have to take a fall related photo dealing with that prompt. So far, I'm 4/4 on photos, which is a new record for me. I took this one yesterday for the "things you see outside but never think of photographing" prompt of the start of the neighbor's firewood pile. Much to Leif's chagrin, I put a nail in our front door, and put a Screamer on it for Halloween. It's a scary face that's motion activated, and he'll say stuff, and then at the end of whatever he's saying, his eyes light up and bug out, his mouth opens and he screams.

I'm having much more fun with this than I thought.

First off, we're getting a ton of kids at the house - we had to supplement our initial 10 bags of candy with extra Laffy Taffy that we had (which is ok, because it's sour Laffy Taffy and the neighborhood kids all told me to buy sour stuff when I asked them last week what candy I should get). After the first few little kids, the older ones (9-12) started coming. On one group, I got the bright idea to wait until the Screamer screamed, and at the same time open the door and scream real loudly too.

I did it a couple of times, and scared a few in the group, but the last group I hit pretty good.

I heard they were middle school kids coming up the walk (I can hear the groups from my office), and thought I knew who they were but wasn't sure. They rang the bell, the Screamer said something, and then said "come closer.....closer" and then he screamed. Just as he screamed, I opened the door and screamed REAL loudly. All the kids jumped and screamed, it was great.

What was even better, was that one of them was someone who had helped me put the Screamer up last week, knew what he did, and still leaned in close to it.

I'm still laughing. What a great way to amuse myself.

I love living in a neighborhood and getting a lot of trick or treaters. I really like Halloween and I enjoy handing out candy and seeing the kids in their costumes.